Twiss begins his fifth season with the Swarm. He joined Greensboro from the Boston Celtics affiliate, the Maine Red Claws, where he was the Manager of Basketball Operations. A sports management major and four-year letterman on the Endicott College basketball team, Twiss also worked with the NBA Communications Department during the 2008 and 2010 NBA Finals. In addition to his roles in the NBA, Twiss’ prior experience includes coaching New England Basketball School Camps and Clinics and the Landmark High School JV men’s basketball team. 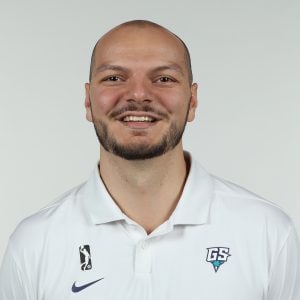 Goose enters his fifth season with the Swarm, third as the Manager of Player Development & Basketball Operations. He began with the Swarm as a Basketball Operations Intern. A graduate from the University of Connecticut, Goose was a four-year manager for the Men’s Basketball program and was a member of the 2014 NCAA Championship team. He also has experience as support staff for the USA Men’s National Team. Goose began his professional career as a community engagement intern for the Boston Celtics.