The Greensboro Swarm, the NBA G League affiliate of the Charlotte Hornets, announced today that a new mascot will debut at the team’s Open Practice on Saturday, October 30, with a name unveiling on Friday, November 5, during halftime of Opening Night. A fan poll will determine the name of the character, ‘G-Bo’ or ‘Swarmy,’ and the public can vote HERE.

“We are excited to introduce our new mascot to Greensboro with this being a celebration of our 5th Anniversary season,” Swarm President Steve Swetoha said. “Our team worked carefully on this character and our design and creative was built around a stronger alignment with the Hornets. This change will have a great impact on our game night experience. We want the public’s help to determine the best name, so we hope everyone votes before Opening Night.”

The new mascot draws on the organization’s iconic purple, teal and cool gray branding colors. The character’s design is reflective of the affiliate relationship between the Hornets and Swarm, sharing similar features as Hugo the Hornet. 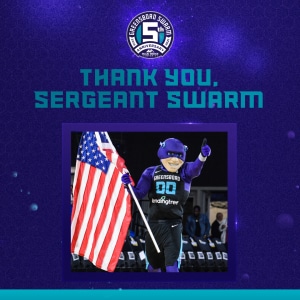 “The addition of a new mascot also means the retirement of Sergeant Swarm,” Swetoha said. “We appreciate our fan base for accepting Sergeant Swarm and embracing him in the community. The mascot will always have an important role on and off the court for our organization and that will continue to be the case.”

Doors at the Fieldhouse at the Greensboro Coliseum Complex for the Open Practice open at 10:00 a.m. ET and fans planning to attend should register by clicking HERE. Important information for attendees can be found HERE.

After the in-person debut, the mascot will be featured on a ‘City Tour’ leading into Opening Night. Appearances by the Swarm will take place at locations across Greensboro with prizes and photo opportunities. Fans can follow coverage of the ‘City Tour’ on the Swarm social media platforms.

Opening Night tips at 7:00 p.m. ET against the Birmingham Squadron (New Orleans Pelicans affiliate). The Swarm will play 26 games at home with 17 of those dates falling on a Friday or Saturday.

Fans can purchase tickets through a variety of options including Season Ticket Memberships, Mini Plans and Group Packages. Single-game tickets are on sale as well.