Charlotte Hornets President of Basketball Operations & General Manager Mitch Kupchak announced today that Hornets assistant coach Jay Hernandez will serve as the head coach of the Greensboro Swarm for the upcoming NBA G League single-site starting in February at the ESPN Wide World of Sports Complex at the Walt Disney World Resort near Orlando, Florida. Hernandez will join the Swarm for the start of the team’s training camp and will return to the Hornets bench at the conclusion of the Swarm’s season. Additionally, Norman Richardson and Evan Harville have been hired as Swarm assistant coaches. 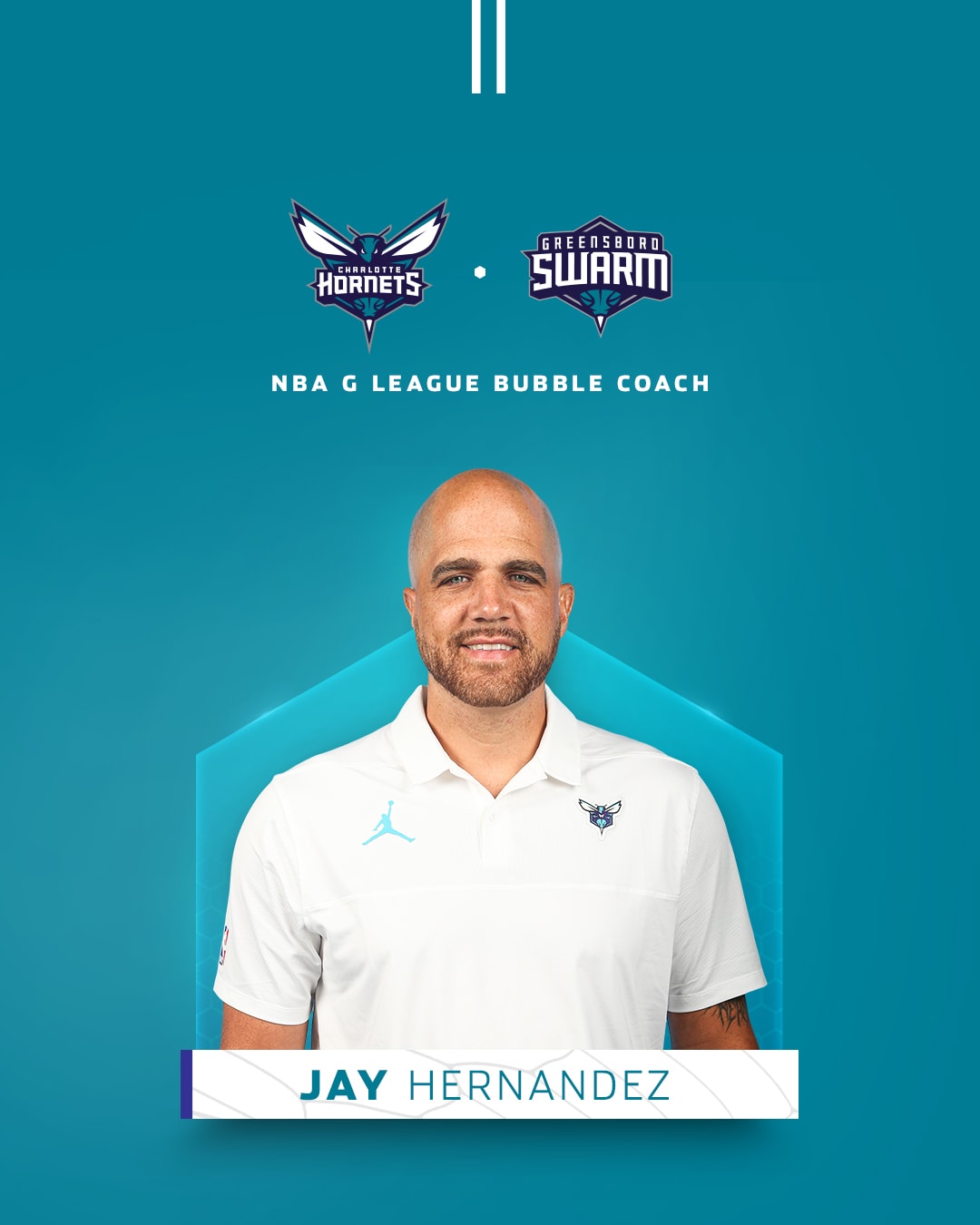 “As an assistant coach and director of player development, Jay has played an essential role in the development of the younger players on both our Hornets and Swarm rosters,” said Kupchak. “We believe his experience in development, his tireless work ethic and his leadership skills will be very beneficial as we look to maximize this G League opportunity. The G League bubble will provide our younger players with coaching, court time and competition that will help them in their next stage of development as they continue to grow and improve.”

Hernandez, who serves as a Hornets assistant coach and director of player development, has been a member of Head Coach James Borrego’s staff since 2018. He previously served in a head coaching capacity for the organization, leading the Hornets during the 2018 NBA Summer League in Las Vegas. The Long Island, New York, native began his NBA coaching career with the Orlando Magic in 2014-15 in player development and assistant coaching roles until he joined the Hornets.

“I am thrilled to have the opportunity to coach the Greensboro Swarm at the NBA G League single-site,” Hernandez said. “I want to thank the Hornets organization and coach JB for entrusting me with the additional responsibility to help develop our young talent in Orlando. I am looking forward to implementing coach’s system and staying true to the principles of Hornets basketball by playing an exciting up-tempo offense and a team-oriented defense.”

Prior to the Magic, Hernandez specialized in player development and ran Pro Hoops Inc., which trained players and teams looking to improve their on-court performance. From 2011-14, Hernandez oversaw the predraft training for 14 NBA Draft selections, including seven lottery picks. As a student-athlete at Hofstra University (1998-01), Hernandez played for current Villanova University head coach Jay Wright. After graduation, he played professionally in Puerto Rico for several seasons.

Richardson was a four-year player for Hofstra (1997-01) and played professionally for the Indiana Pacers and Chicago Bulls in 2001-02. The Brooklyn native played professionally until 2010, including stops with former NBA Development League franchises (North Charleston Lowgators in 2003, Fayetteville Patriots in 2006) and overseas.

Harville returns to the Greensboro sidelines after previously serving as a Swarm assistant coach in 2018-19. With an extensive background in player development, Harville has also coached collegiately at Wingate University (2017-18). He is a graduate of Westminster College and served as an assistant coach for the Titans immediately after graduation (2014-15). Harville spends his offseason conducting player workouts for NBA and NBA G League caliber players.

Returning to the Swarm in their roles from last season are Cam Twiss (General Manager) and Daniel Goose (Manager of Player Development & Basketball Operations).