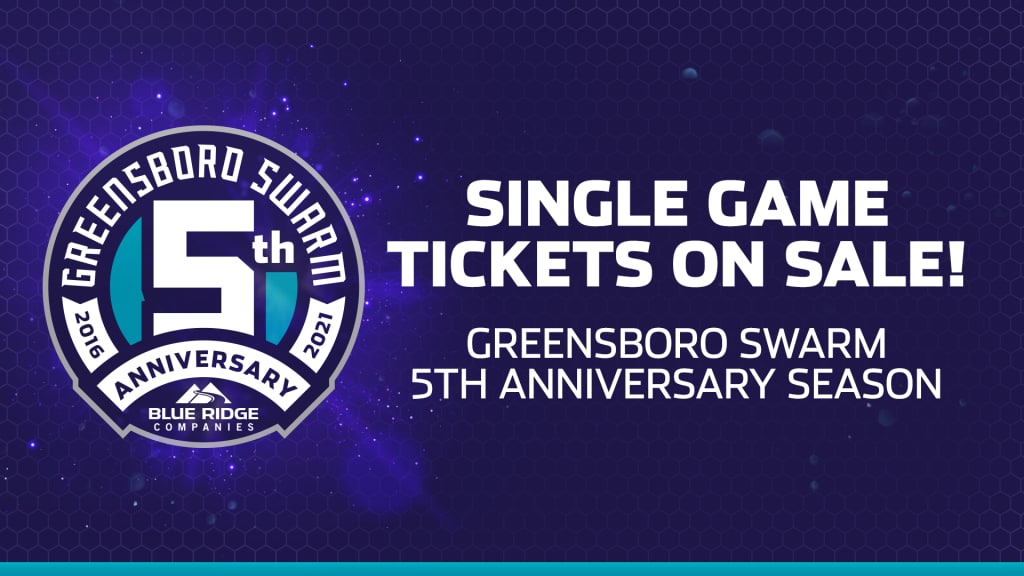 The Greensboro Swarm, the NBA G League affiliate of the Charlotte Hornets, announced today that single-game tickets for the 2021-22 season are now on sale. Tickets for home games at the Fieldhouse can be purchased at gsoswarm.com, ticketmaster.com or at the Greensboro Coliseum Complex Box Office. The upcoming season is a celebration of the 5th Anniversary of NBA G League basketball in the Triad, presented by Blue Ridge Companies.

“Basketball is back in the Triad and we are excited to have fans back to celebrate our 5th Anniversary,” Swarm President Steve Swetoha said. “This is a special season for us and we cannot wait to welcome back our passionate fan base that continues to help us have one of the best home-court advantages in the NBA G League. Our organization has been diligently preparing over the past year to provide fans with an affordable, family-friendly atmosphere and we look forward to seeing Swarm basketball back in the Fieldhouse.”

Highlights of the Swarm schedule include two additional games against NBA G League newcomer, Ciudad de México, on December 10 and 11, 1:00 p.m. ET matinees on New Year’s Eve vs. the Windy City Bulls (Chicago Bulls affiliate) and on Martin Luther King Jr. Day vs. the Capital City Go-Go (Washington Wizards affiliate) and four of the last five games of the season being played in Greensboro.

The Swarm will play a record 26 games at the Fieldhouse in 2021-22. The schedule includes 17 of those 26 games coming on a Friday or Saturday. Opening Night is set for Friday, November 5, against the Birmingham Squadron (New Orleans Pelicans affiliate) at 7:00 p.m. ET.

Single-game tickets can be purchased for as low as $10 per ticket for the baseline bleacher seats. An additional 50 percent discount for military and college students can lower the cost to $5 per ticket.

Fans can also purchase tickets for multiple games through a variety of options including Season Ticket Memberships, Mini Plans and Group Packages.

Information on theme nights and promotions will be announced at a later date.